In 2022 your Winnetka Neighborhood Council has been focused on community outreach and celebrating Winnetka’s Centennial. 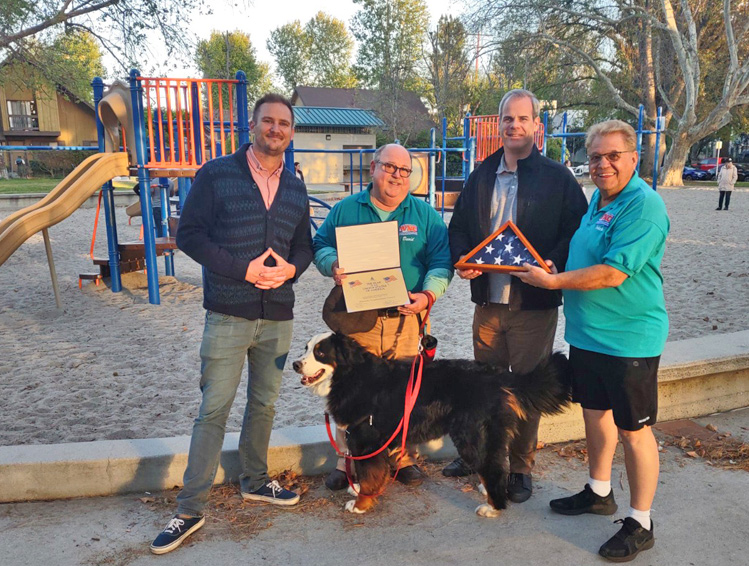 In March we began the celebrations with John Alford, from Congressmember Brad Sherman’s office, presenting a flag that had been flown over the US Capitol, in honor of Winnetka’s Centennial. Pictured are three past and current WNC Presidents: Eric Lewis, Erick Lace, and David Uebersax (with his dog Bitzli Blue). Taking the picture was WNC Secretary Elizabeth Chapman and neighbor of the park, who also brought Girl Scout Cookies (some of which were later consumed by Bitzli!).

Of note is that Eric Lewis, representing RecWest Outdoor Products, was on hand to measure the current footprint of the Runnymede Playground, which is set for redesign, expected in 2023. Runnymede has deep meaning to the concept of community and government. Word is that Winnetka, originally known as Weeks’ Acres, was a Southern California development by Charles Weeks, who had a developed similar community of chicken ranches in Northern California named Runnymede. The most famous Runnymede is a meadow along the Thames River in Surrey, just west of London. This is believed to be the location of the Sealing of the Magna Carta in 1215. Appropriately, the name may be derived from the Anglo-Saxon ‘runieg (regular meeting) and ‘mede’ (mead or meadow), describing a place in the meadows used to hold regular meetings. 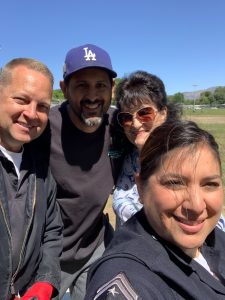 The WNC Outreach Committee has worked closely with Eric over the year to make suggestions for the design of the new playgound, and some of this historical background will be party of the Interpretive Elements of the installation!

In April we held our annual Spring Clean which brought together neighbors to clean up around Winnetka Park as part of an Earth Day Celebration. WNC President David Uebersax and Vice President Erick Lace attended the ribbon cutting on April 1 of the new mini-amphitheater and reading garden at Stanley Mosk Elementary School, along with LAUSD Board Member Nick Melvoin. This project included funds from a Neighborhood Purpose Grant approved by WNC. 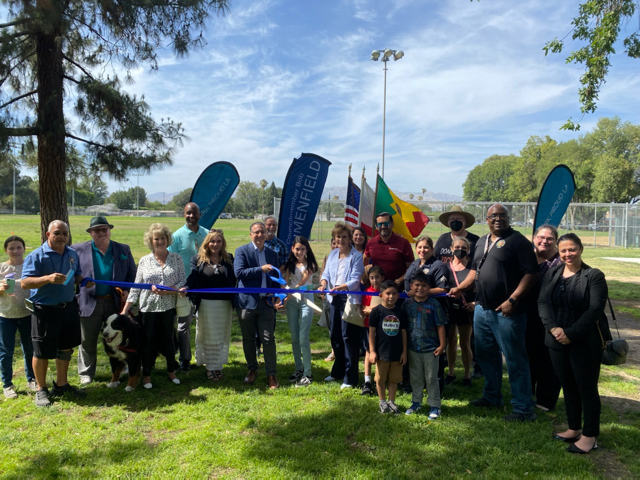 In June we were excited to join in the Winnetka Park Ribbon Cutting to celebrate improvements including a new walking path, fitness equipment and basketball court. We appreciate all the hard work by Councilmember Bob Blumenfield’s Office and the Department of Recreation and Parks to bring this to completion. 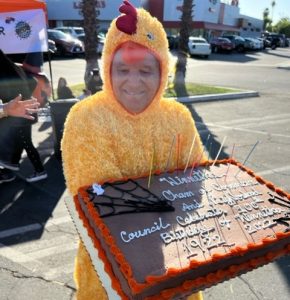 David Uebersax and WNC Board Member Victor Lerma attended the ‘Reach The Roof’ ceremony of Winnetka Palms on June 23, along with CD3 Bob Blumenfield, representatives from Hollywood Community Housing who will be operating the affordable housing project on Sherman Way near Winnetka, along with the builder.

In the fall our centennial celebrations started in earnest with sponsorship of the Winnetka Chamber of Commerce Halloween Trunk or Treat event and 100th Anniversary celebration at the Winnetka Bowl. This was a fun event where Vice President Erick Lace donned a chicken costume in honor of the original chicken farming operation that launched Winnetka by farmer Charles Weeks. 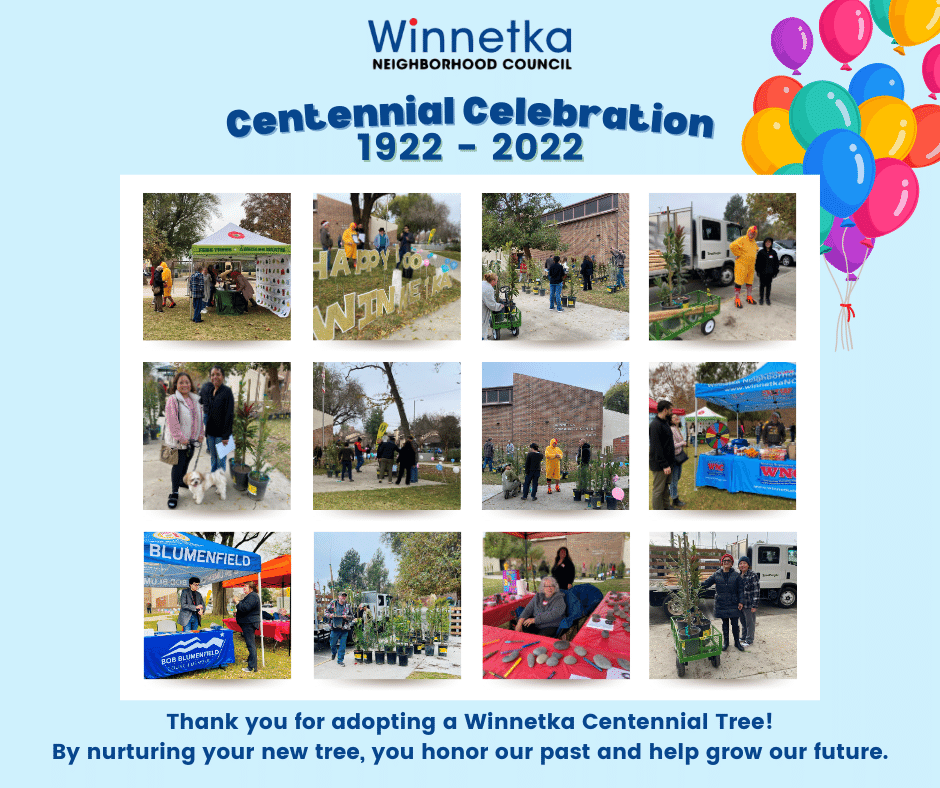 In December we hosted a Centennial Celebration to plant 100 Tree for 100 Years. This tree giveaway was meant to help neighbors expand our tree canopy. We enjoying meeting stakeholders at this fun community event and inviting them to get involved in Winnetka.

In addition to our outreach events, we brought news of city and congressional happenings as both City Councilmember Bob Blumenfield and Congressman Brad Sherman greeted stakeholders at our February and March meetings respectively. Our meetings are opportunities to hear from our elected officials, discuss current concerns and weigh in on them to City Hall.

Finally, we have been working with LA River Walkers and Watchers and their monthly clean ups and mindful of various improvements to the upper stretch of the Headwaters (towards Canoga Park High School), including the Owensmouth Pavilion.

Now is a great time to get involved in Winnetka and we invite you to:

Find out more about the origins of Winnetka: https://planning.lacity.org/blog/weeks-poultry-colony-winnetka