Previous Next
2015 Year in Review 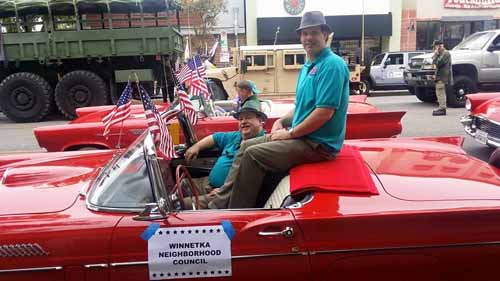 In 2015 the Winnetka Neighborhood Council completed community beautification projects, supported a number of great community events to reach our stakeholders, tackled land use issues, and voiced our opinion to the City on topics of concern to the community.

The largest project we worked on this year was using $50,000 of Zine Funds allocated to Winnetka. Board Members worked with the City’s Urban Forestry Division and Street Maintenance Division to identify trees to be trimmed on the east side of Winnetka between Parthenia and the LA River and on the west side between Nordhoff and Victory. The second part of that project was to dispatch pothole trucks to the following areas: east side of Winnetka between the LA River and Parthenia, west side of Winnetka between Victory and Nordhoff, Saticoy between Corbin and De Soto, Vanowen between Corbin and De Soto. The Winnetka Neighborhood Council was excited to bring these great improvements to our community.

Land Use is a hot topic in Winnetka which has a few large open spaces attracting developer interest for infill projects. The Land Use Committee carefully reviewed each project and made a recommendation to the Board. The Board took the following actions:

One of the ways the Winnetka Neighborhood Council uses to make government more responsive to our needs is to take positions, write letters and submit Community Impact Statements (CIS) which become part of the legislative record on motions the City Council is considering. Our actions in 2015 include:

Other concerns the Council is still addressing include the competing challenges of bike lanes and parking on Winnetka and homeless encampments at Winnetka Park.

Our committees continue to be where the work gets done and we invite you to join us!  We meet as shown below. Check our calendar for the specifics.

We had two new members join the Board this year: Carlos Perez, Craig Ruggless and will be holding elections on April 17 for half the board seats.