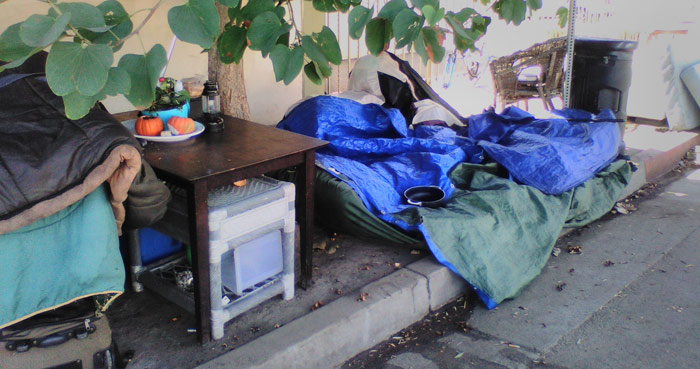 The Winnetka Neighborhood Council was honored to have Councilmember Bob Blumenfield as our guest at our February 13, 2018 meeting. Blumenfield spent about 45 minutes speaking to the community about projects he is working and addressing their questions. The number one topic on everyone’s mind was the ongoing homelessness problem we have throughout Winnetka and the San Fernando Valley. Blumenfield patiently expressed that he shares the community’s concerns and talked about what he’s been doing to address the problem.

Many of the stakeholders in attendance were from the Winnetka Park area. Blumenfield said he is working on solutions to prevent homeless encampments at Winnetka Park. The homeless have been using an alcove created by an emergency exit on the north end of the recreation center building as a shelter. Blumenfield announced he has worked with the park to install a wrought iron fence which will allow for safe exit from the building, but prevent entry and use of the area as a shelter. Several years ago a taller fence was added along the back of the park to protect the adjacent neighbors from the homeless.

He also noted the park is receiving other upgrades including new gym floors and basketball hoops. Once the floors are replaced, they will be on an annual maintenance schedule. Lighting across the park will be retrofitted in a multiyear LED project. The lights will be on sensors to save money. The motion sensors will cause the lights to go on when the park is closed from 10:30pm – 5:30am.

In the next few weeks an advisory committee for the Winnetka Recreation Center will be launched. The Assistant General Manager for Recreation and Parks, Ramon Barajas, was on hand to provide an update, sharing that there would be increased staffing at the recreation center, as Rec and Parks is bouncing back from the 600 employees they cut across the city due to budget cuts. In response to an inquiry about possibly adding a fitness zone, Barajas explained that they cost $7-10,000 per station and could be considered for this park.

After the park discussion, there was a lengthy discussion about the impact of homelessness in Winnetka. With the complexity of the extensive homeless problem, Blumenfield described a number of initiatives being considered such as the Motel Conversion Ordinance which is working its way through city council committees. This ordinance would involve providing housing through the hotels which would be contracted with the county to provide services. The hotels would benefit by being at 100% capacity. The hotels would keep their existing footprint, but might undergo some cosmetic improvements, such as exterior painting.

Stakeholder Judith Giglio shared her frustration about graffiti, dumping and homeless in the alleys along Penfield Ave. The alley is filled with people under the influence of drugs and alcohol vandalizing and breaking in to area homes. Blumenfield commented he is very aware of this hot spot, explaining that he has sent out rapid response teams eight times in the last month. They are working on how to take this area back.

Attendees shared their perspective that nothing is being done on homelessness and that after a cleanup, the homeless are back right away. Blumenfield understood their concerns and explained that due to court cases that the city lost, laws prohibiting sleeping in a vehicle were overturned as were laws prohibiting living on the street. The good news is that the number of field representatives to help people get into housing has been tripled, but more affordable housing needs to be available. The challenge with affordable housing is people not wanting it in their neighborhoods and the increased density that neighbors also don’t want.

In a follow up call with the Councilmember’s Office, WNC learned that there has been forward motion on housing for the homeless. The approved affordable housing managed pipeline includes 16 projects in pre-development, 20 that are fully funded, and 19 that are completed. Using HHH funds, the Housing and Community Investment Department is executing agreements with nine developers for 615 permanent supportive housing and affordable housing units. At this time, none of those are planned for the 3rd Council District.

Blumenfield stressed the importance of  businesses having “No Trespassing Signs” in order to prevent encampments. Signs make it easier for law enforcement to address encampments on those properties. There was also a discussion about reforming proposition 47 which has decriminalized offenses and made it impossible for the courts to require drug addiction treatment among other programs.

In addition to discussing homelessness, Blumenfield outlined how the city is in the process of transitioning illegal industries to legal, taxable ones, including Air BNB home rentals and marijuana production and sales. They are in the process of developing regulations to manage cannabis sales, creating a clear list of who is licensed, and collecting taxes on those businesses. Regarding home rentals, the idea is to limit rentals to primary residences and limit the number of rentable days to 180 per year. Board member Steven Fuhrman was concerned about a rental near him that creates parking and loitering issues for neighbors.

Also of interest is Blumenfield’s plan to increase the tree canopy in Winnetka to help reduce the average temperature. He has specifically identified the intersections of Winnetka / Roscoe and Winnetka / Saticoy as two target zones for 46 more trees. He proposes to invest $40,000 into the Winnetka Tree Initiative and would like to partner with the WNC to match that amount for the completion of the project.

Winnetka NC President, JJ Popowich, commented that the Board shares the community’s concerns about the homeless problem. He went on to say that now that the Board has a Treasurer he is looking forward to partnering with the community to find ways to help address the problem. In response to the challenge by Councilmember Blumenfield for trees, Mr. Popowich commented that the Board would discuss this issue and see if there is merit to the proposal. He went on to say he would really like to see more trees but only if they can be maintained and watered. His concern is the trees will be planted and die from lack of watering and maintenance. 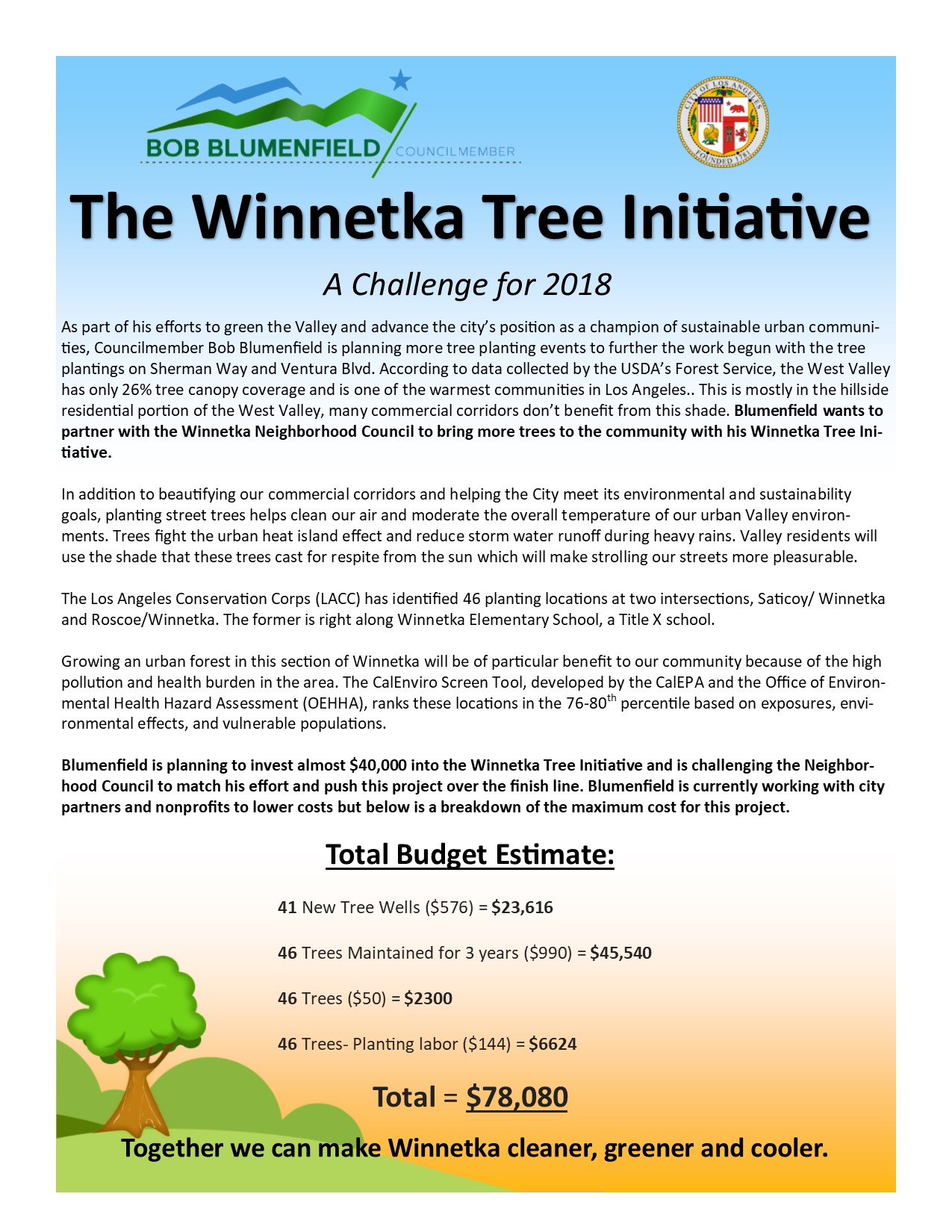