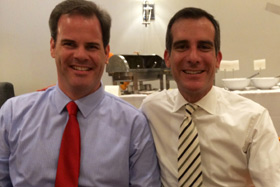 In May, WNC President Eric Lews joined CD3 NC Presidents and Chairs, the Presidents of the area’s Chambers of Commerce, and a few others for a lunch hosted by Councilman Blumenfield. Mayor Garcetti was the guest of honor as he was touring CD3 that day. He visited Winnetka and took a look at “the pit” at Sherman Way and Mason, which he called pitiful.

President Eric Lewis was even seated next to the mayor for lunch. He said he wanted to sit in the “Eric corner.”