This topic is being considered by the Public Works and Transportation Committee. Members of the committee are divided on the issue. They understand that Parthenia is largely residential west of Corbin and businesses east of Corbin. Residents would like speeds reduced to be safe for a residential street. They would like Parthenia to be a residential artery rather than a cross the valley artery. Some are concerned that if Parthenia traffic is reduced to one lane and slowed down, that drivers would flood the side streets. However, one board member tested this idea and found it difficult to cross the valley in side streets. Others wonder if the traffic is removed from Parthenia, where will it go and how will it slow down commutes on those roads?

At the November 11, 2014 Board meeting the Board heard a presentation by David Somers from the Los Angeles Department of City Planning on a proposed Road Diet for Parthenia St. Somers set the stage by outlining the safety issues along Parthenia, noting that along the eight mile stretch of Parthenia between Topanga and Kester there were 431 collisions between 2007 and 2011 or 10+ collisions annually per mile. The specifics can be found in this Parthenia Safety Facts handout.

Further, in this Parthenia Mobility handout Somers notes that 34% of Parthenia neighborhood households have either 0 or 1 vehicle, 37% of trips are three miles or less and 28% of the nearby population is between 15 and 35 years old.

One way to reduce accidents it to put a street on a road diet, which is intended to reduce speeds. Wide streets have been designed to accommodate a lot of traffic and higher speeds than are posted. Reduced speeds equal greater safety. Pedestrians fatalities at 50 miles per hour are 99%. 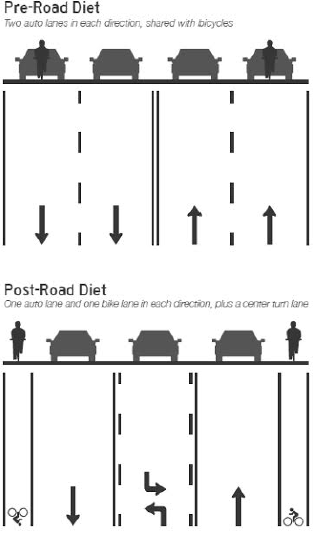 City Planning is seeking input from Neighborhood Councils and community members on this proposed project:

You may send your thoughts on the proposal to david.somers@lacity.org

The next steps on this proposal are to receive the report from traffic consultants hired to evaluate the effects of the proposed changes on traffic, report findings to the community and solicit feedback. The traffic study should be available January 2015. If the project is approved, work may be completed in 2015. Funding for the analysis and restriping is from the portion of the local allocation the City receives form Measure R specifically set aside for bicycle improvements.