Williams Homes is proposing a zoning change to accommodate 73 detached single homes to be built at 8544-8654 Winnetka, the vacant property near the southwest corner of Winnetka and Parthenia. They presented their detailed proposal at the November 2013 PLUM meeting. 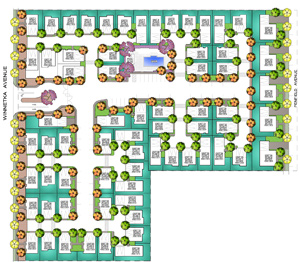 PLUM committee recommendations were presented at the November Board Meeting: two ingress/egress sites on Winnetka (right hand only), emergency only access on Penfield, addition of a left hand turn signal at Winnetka & Parthenia, cut out on east side of Winnetka for traffic flow in and out of unit, adjoining lots should be able to keep currently allowed animals & livestock, exits should be angled to prevent exiting cars’ lights from shining in houses across Winnetka, houses on the edge of the development should face Winnetka & Penfield.

PLUM also supported the developer’s plans to mitigate headlights shining into Penfield residences with fencing, a dance structure at the Winnetka Recreation Center and planting of trees along the Chase side off Winnetka Park. See exact wording in item 14 of agenda.

At the November 12, 2013 Board Meeting stakeholders showed up en masse to provide input to the proposal. Concerns were expressed about the proposed density, parking, construction hours, traffic flow, speeding and local livestock.

The Department of City Planning held a public hearing on March 4, 2014 regarding the development proposed by Williams Homes for 8544-8654 Winnetka. The City approved the proposal in 2014 in spite of WNC concerns.