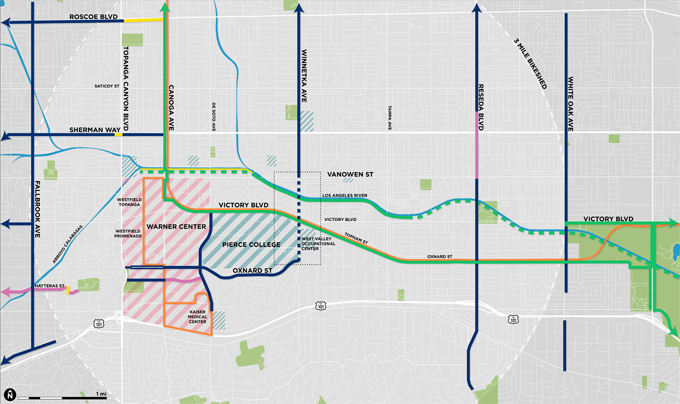 After a year-long planning and public engagement process, LADOT has received approval from LADOT General Manager Seleta Reynolds and the Council Office of Bob Blumenfield (CD 3) to proceed with the final design and implementation of approximately 0.9 miles of new bike lanes on Winnetka Avenue from Vanowen Street and Oxnard Street, as well as a new signalized crossing (pedestrian hybrid beacon) at Winnetka Avenue and Gilmore Street. Earlier this year, LADOT evaluated the traffic and safety impacts of the proposed project and presented the findings at a noticed open house/public hearing,where meeting attendees were invited to submit oral and written comments. The project is exempt from CEQA per the statutory exemption for bike lanes consistent with an adopted bicycle plan, as well as categorical exemptions for minor alterations to existing streets and the installation of traffic signals, signs, and pavement markings. Click here to view the Notice of Exemption along with supporting documentation, including a summary of comments received and responses from LADOT.

Winnetka Avenue is designated on the Mobility Plan 2035 Bicycle Lane Network. Bike lanes currently exist on Winnetka Avenue from Devonshire Street to Vanowen Street to the north, and the Winnetka Avenue Street Improvements project closes a critical gap in the active transportation network by continuing these existing bike lanes southward to connect to the LA River Greenway, the Metro Orange Line busway and bike path, Pierce College, and existing bike lanes on Oxnard Street. Closing this gap results in an approximately 5.3-mile-long continuous bikeway through the West San Fernando Valley. In addition to enhancing connectivity, the project will create a safer environment for people riding bicycles along Winnetka Avenue through the addition of designated bike lanes.

The project involves reconfiguring travel lanes to accommodate new bike lanes (Class II) on Winnetka Avenue from Vanowen Street to Oxnard Street. Between Vanowen Street and Victory Boulevard, this will be accomplished by removing the existing peak-hour parking restrictions on both sides, replacing that lane with the bike lanes and all-day parking. This design mimics the street configuration on Winnetka Avenue north of the project area, and provides parking for the many residences fronting the street.

On the block between Victory Boulevard and Calvert Street, LADOT received feedback from Council District 3 as well as the public that a southbound right turn lane into Pierce College’s Brahma Drive entrance should be maintained for the entire length of the block during the morning peak hours. LADOT responded to this feedback by modifying the design to retain the existing peak hour parking restriction on the west side of Winnetka Avenue from Victory Boulevard to Calvert Street/Brahma Drive. Within this segment (Victory to Calvert/Brahma), the southbound bike lane design has been updated from a striped bike lane (Class II) to a barrier-protected bike lane (Class IV) situated between the sidewalk and the parking lane/peak hour right turn lane. 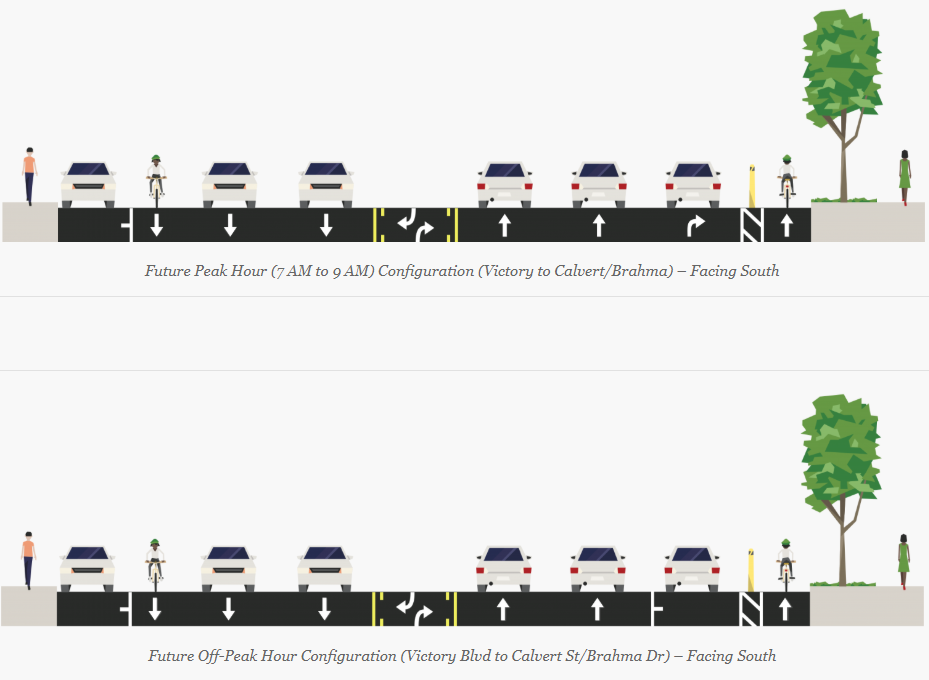 Finally, between Calvert Street and Oxnard Street, bike lanes will be added without the need to removal any travel lanes. (There is currently no on-street parking on this block.) The design team is exploring the potential for incorporating a buffer with vertical delineators alongside the bike lanes in this segment to enhance the comfort and safety for bike lane users.

To complement the new bike lanes, the Winnetka Avenue Street Improvements project also includes a new pedestrian hybrid beacon (controlled crossing) across Winnetka Avenue at Gilmore Street that will enhance access and safety for people who walk or bike to the Los Angeles River and other destinations on both sides of the street. Pedestrian hybrid beacons are not full traffic signals, but instead are activated through a push-button and require vehicles traveling on the major street (Winnetka Avenue) to come to a full stop and wait for pedestrians and people on bikes to clear the intersection before proceeding.

Implementation of the first segment of the project, Vanowen Street to Victory Boulevard, is anticipated to occur in early June 2019. The remaining segment (Victory Boulevard to Oxnard Street) will be installed later, based on the street resurfacing schedule. The new crossing at Gilmore Street will also follow. Stay tuned to our blog and twitter account (@ladotbikeprog) for updates on the project’s implementation schedule.

If you have any questions on the project, please contact LADOT at lameese.chang@lacity.org or the Office of Councilmember Blumenfield at (213) 473-7003.