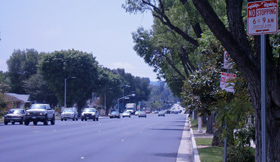 The City has recently installed peak hour parking restrictions on Winnetka between Vanowen Street and Victory Boulevard. Neither the residents nor the Winnetka NC were ever informed about these restrictions prior to their installation and stakeholders expressed concern at our April 2012 meeting.

Glenn Bailey, Vice-Chair of the Bicycle Advisory Committee for the City of Los Angeles has been following this construction project for well over a year, anticipating that bicycle lanes would be installed upon completion of the bridge widening. He hoped that the existing bicycle lanes would be extended from their current terminus at Gault Street south to Victory Boulevard (or hopefully even further south to the Pierce College entrance Brahma Drive). This would be in compliance with the City’s 2010 Bicycle Plan, which was adopted by the City Council in March 2011. The plan designates Winnetka Avenue as part of the City’s backbone network between Ventura Boulevard to Devonshire Street.

However, the newly installed peak hour parking restrictions along Winnetka Avenue between Vanowen and Victory have unnecessarily created a dangerous condition for bicyclists along this stretch as the right lanes are too narrow to be shared. They have also precluded the installation of the bicycle lanes. And those parked were surprised by tow trucks.