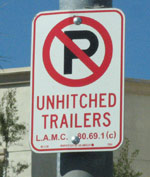 At the April 2009 meeting the Board received word that the request for installation of “No Unhitched Trailers” signs is moving forward. The Board specifically addressed the blight and danger of unhitched trailers with advertising by passing a motion at the January 2009 meeting requesting signs saying, “No Unhitched Trailers”. The signs are requested for Winnetka Ave (between Victory Blvd. and Parthenia Ave), Roscoe Blvd (between Corbin Ave and DeSoto Ave), and Sherman Way (between Corbin Ave and DeSoto Ave).” Read the letter.

At the January 2009 meeting the Board also approved a motion to share the cost of solar powered speed indicators signs with Councilman Zine. These signs tell motorists how fast they are going and are expected to cause drivers to reduce their speeds. However, as of April 2009, the cost has gone up significantly and the Board decided not to move forward with the signs.

To address speeding the Board did make a recommendation in April 2009 to the City to allow for the current increased speed of 40 mph on Mason, Victory & De Soto. The City had completed a traffic study indicating that the speed limits on those streets should be increased to 40 mph. Once the City makes the change, then officers will be able to issue tickets using radar.